Strangers in a Strange Land

I am aware that the Subscription function is not working here and will get that fixed.  Thanks for reading.
Blog Feb 2, 14
Monday afternoon, we flew to Taiwan for one night.  Bob had a meeting there and his team invited us out to dinner.  This is where I saw the largest crab I have ever seen in my life in a tank at a restaurant called “The Really Good Seafood Restaurant.”  I want to be clear that we did not eat this crab.  Animal rights activists are upset with me, but I just photographed it.  We had many, many courses of fish and seafood, all quite good and 2 bottles of California red wine.  Taipei is a nice city and it’s quite a bit warmer there than Shanghai, even tropical looking with wild vines all over and mini farms between the city and the airport.  In the afternoon, it was about 85 degrees but folks on the streets were still dressed for winter with down jackets and boots.  WTH?  After Bob’s early morning meeting, we went  to the National Palace Museum which houses the largest collection of Chinese art as it was taken out of China prior to 1949 when the Communist Party came to power.  There were oodles of carvings (sadly, lots of ivory and rhinoceros) but also wood and stone.  The smallest carving was of an olive pit:  when looking at it with a magnifying glass, you can see a boat, its decks, and 8 people drinking tea on it.  Also of note were the pottery and ceramics and, oh, 8000 years of history.  China is epic.

Wednesday was my first downer day.  Just about lost my mind from misunderstandings and wow-we-live-in-China-now moments.  First, I made a whole hearted attempt to go to a coffee shop to meet the “Brits Abroad” group over on the Puxi side of Shanghai.  Bob was working at home so I called Roger and asked him to pick me up.  I looked up the Costa Coffee (a chain like Starbucks) and found the address in English.  I showed it to Roger and he appeared to understand where we were going.  The coffee was from 10-11:30 and I had set out at 10.  At 11:10 I abandoned plans.  Roger was very apologetic; now I am bummed and he is bummed he couldn’t find it.  We got Bob at home and drove to his office to pick up Helina who was going to help us open up a bank account.  The 3 of us arrived to a very busy bank and took a number.  There were 20 people in front of us and 4 tellers.  In a few moments, 2 of the tellers went to lunch.  90 minutes later we were still waiting.  We stood because every seat in the bank was taken.  Helina regaled us with interesting facts about China and even coached my Mandarin pronunciation.  Finally, she just barged into one of the lines and insisted someone help us.  They were very fast and a few customers got their panties in a twist over us being helped.  I was so grateful to get out of there.

We got a ride home–now it’s 2:30 or so and neither of us has eaten lunch.  So we went over to a good restaurant called Bi Feng Teng in the most nearby mall and ordered well by ourselves.  None of the employees spoke English so we point at the menu items.  (At another time, I will write an entire post about the joys of dumplings.  I cannot say enough about these delicious morsels of ecstasy.) While in the mall, we went on a quest for Red Envelopes.  Red Envelopes are necessary for giving others money as New Year’s gifts.  It was explained to us that we need to give a gift to each employee: the maid and the driver as well as the doormen, the concierges, and maintenance guys of our building.  We have google translate on our phones which is how we manage every other situation but it was not working–mysterious Red Envelopes were on the 6th floor but we couldn’t find them.  Finally on the way home, we found said envelopes in a simple store on the street.  We have now given gifts to about 12 different people in our lives in a very short time and they are very appreciative.  I learned how to say Happy New Year in Mandarin: Chin Nien Kwai Luh and I tell you, it is getting me a lot of kudos. The Chinese are thrilled I have learned this simple and festive phrase.  I was so down the whole day after the coffee shop debacle.  It is very frustrating to live somewhere where there is such a huge language barrier.  Of course, things like this are bound to happen.

The fireworks had been ramping up all week for New Year’s but Thursday, January 30 was the night of the Lunar New Year and we ushered in the Year of the Horse.  Everywhere out on the streets it is possible to purchase fireworks for personal use and from what I can tell, everyone in China is blowing something up.   The pollution and visibility were quite awful in the morning and got worse and worse throughout the day (likely not helped by the fireworks).  New friends Siobhan and Martin came over and we watched what we could from both the front and back windows of the apartment.  Right before midnight, it got louder and louder and it turned out the show was coming from the street just outside our apartment block.  The smog was higher up and we were missing it-it was much clearer from below. They were ready to leave so we went down with them and watched almost one hour of high-quality, deafening, stuff-falls-on-your-head fireworks.  The boxes of explosives were coming right out of our building and the doormen were leading the show!  We stayed out until almost 1am.  The following morning, I was still picking debris out of my hair.

And joy of joys, we hired an “Ayi”– a maid!  I don’t even know her name because I keep forgetting to write it down.  I arranged to hire her through one of the concierges downstairs named Angel and she began on Wednesday.  Our apartment is spic and span but mostly she is darling and smiles a lot.  I wonder her age because her skin looks like she is 15 but she has a few gray hairs so I really don’t know.  I was matching a few pair of socks and she motioned that she would do it for me.  She took out all of my socks and organized them into perfectly matching rolls and put them back in my drawers.  So grateful.

Friday and Saturday were quite warm and we ventured out to take long walks on the Huangpu River which is a short walk from our apartment.  It was over 65 degrees and hence Bob wore shorts. People began staring and pointing right away and Bob’s reaction was indignant: “This from a nation of people with no style!”  We wondered if perhaps they were freaked out to see his white hairy legs?  A thousand tourists from the provinces were out walking around near the ferry stops with little children and grandmas and grandpas and everyone of them saw Bob’s legs.  Turns out wearing shorts out in the city is never done.  Faux pas!  In further exploration today (wearing proper attire) we discovered a very nice Indian restaurant with Carlsberg beer on tap.  We can leave our house and take a 5 minute ferry ride for 40 cents and walk a block to a slew of great restaurants.

We are back on Social Media with a VPN!  Woohoo!

Lastly, Bob’s colleague gave us Chinese names.  Bob’s is Shen Fei De and mine is Wo Dan Ni.  Happy Year of the Horse Everyone!  Go Broncos!

pics below:  Crab in Taipei, Danielle at the Cool Docks, cases of fireworks (they just light up the whole box), view from Puxi to Pudong (our building complex is to the right), fireworks 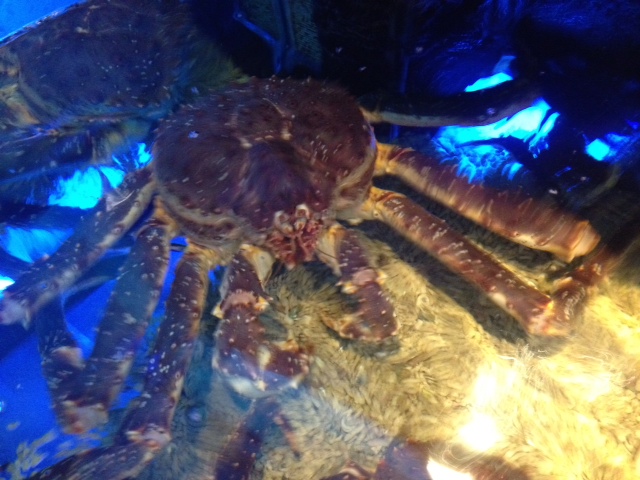 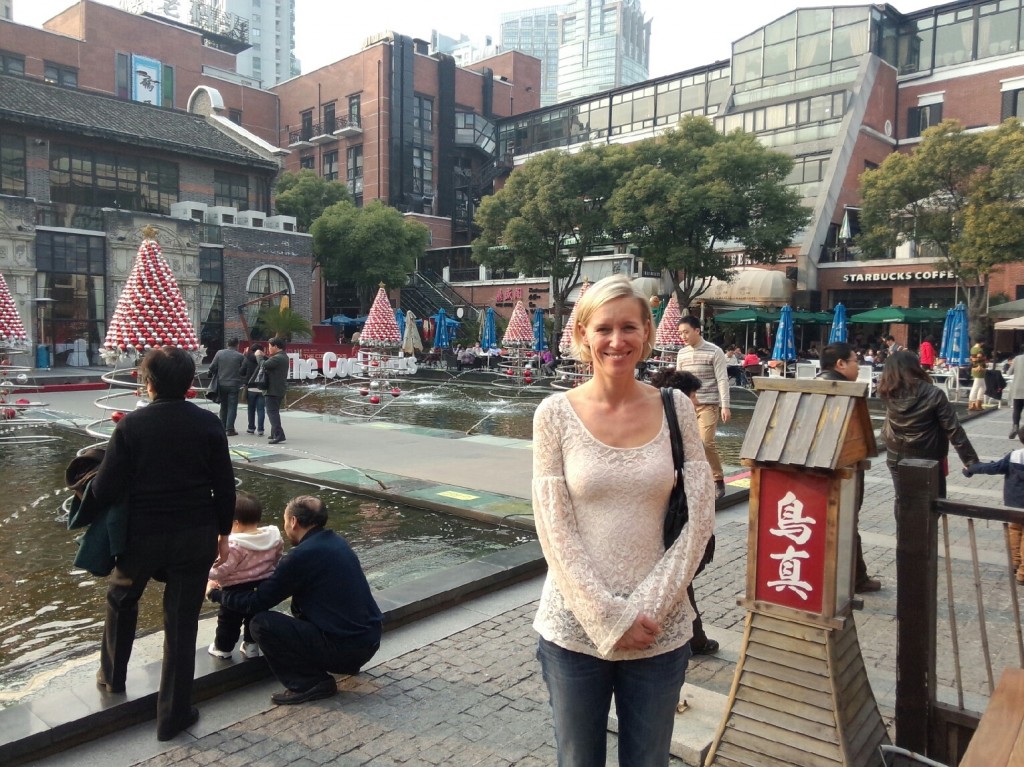 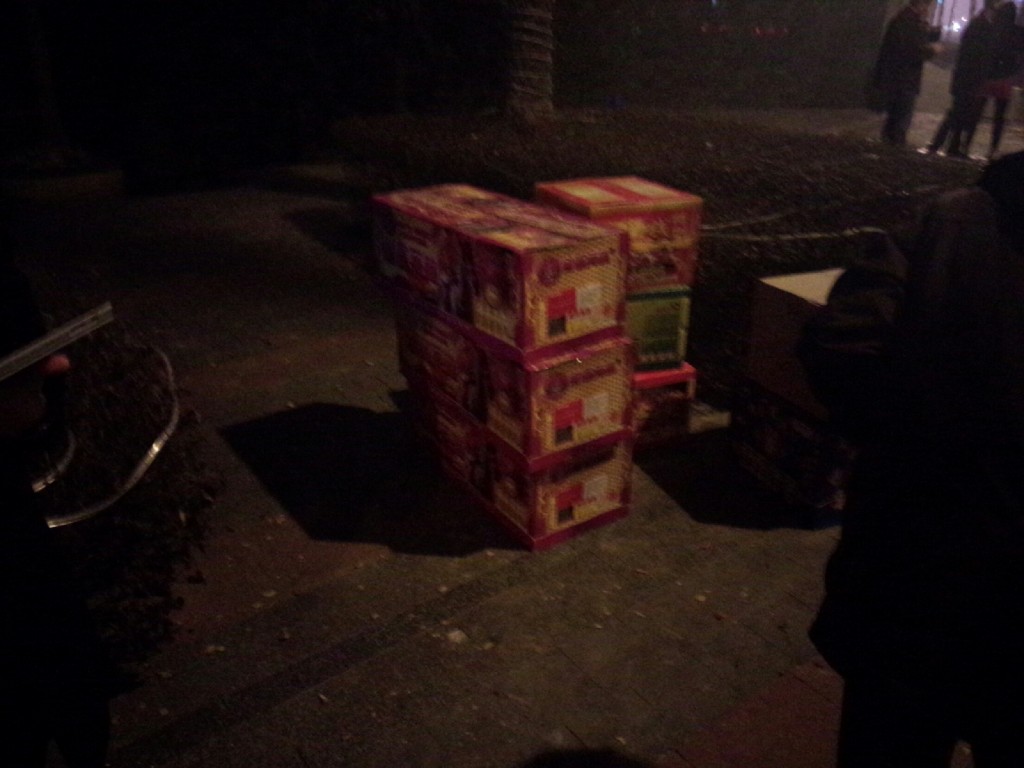 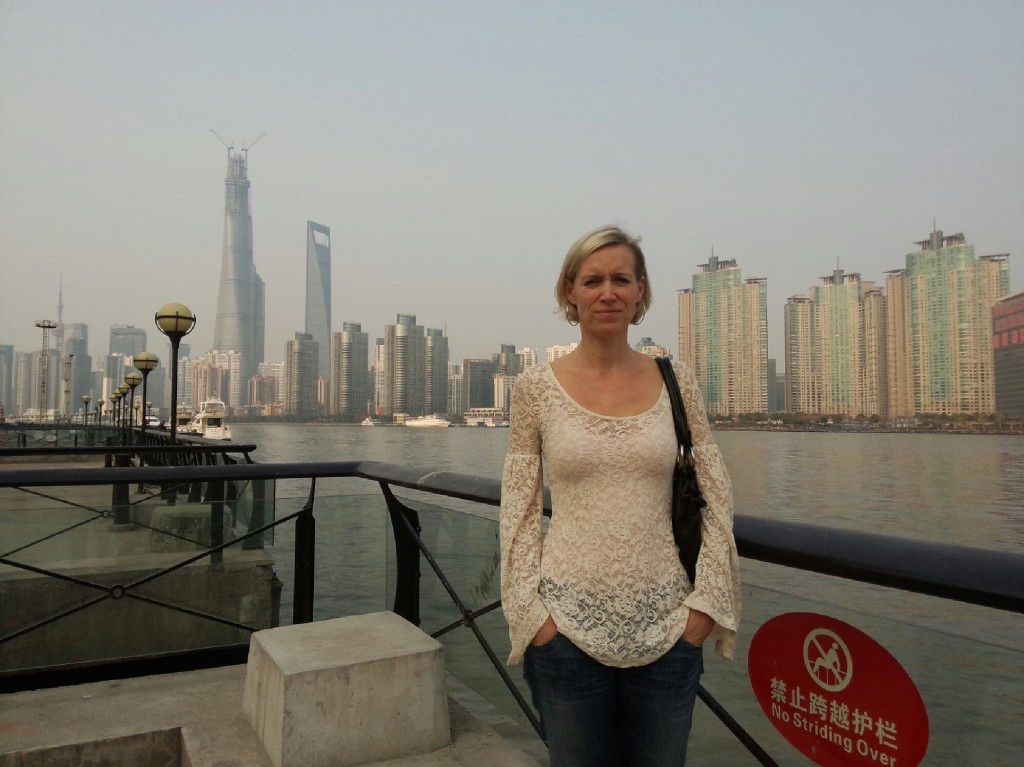 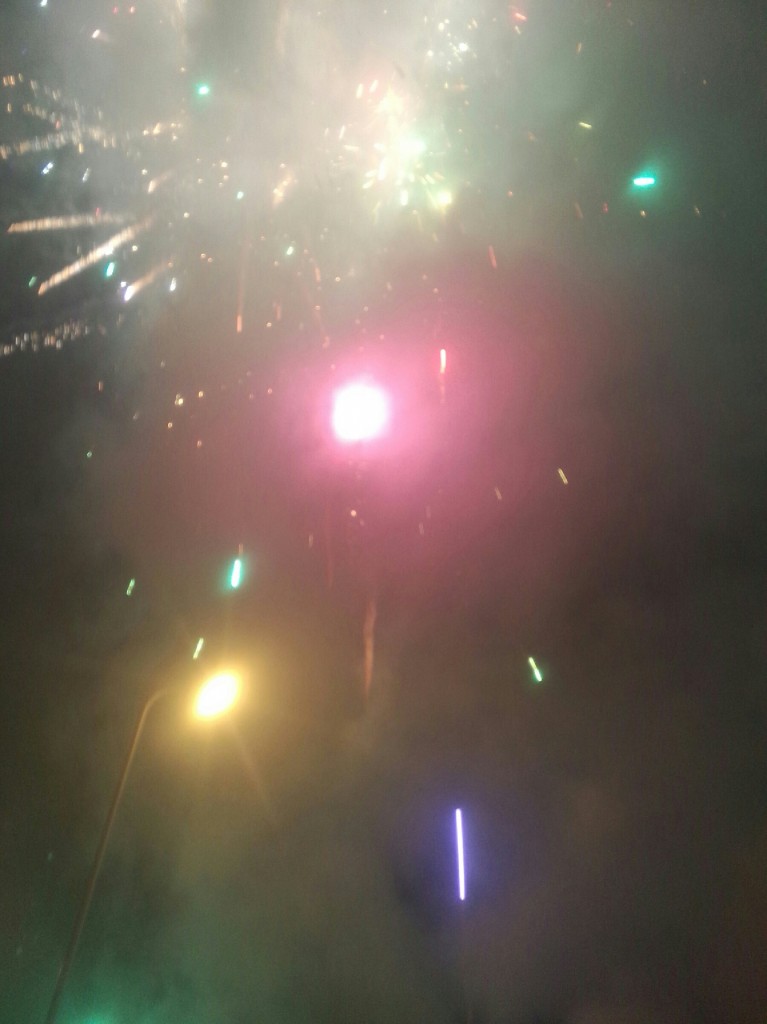 PrevPreviousFirst Week in Shanghai: Ikea, Linen shopping, and the man with 3 kidneys
NextBlog 2/6Next