Where the Holy Dwells 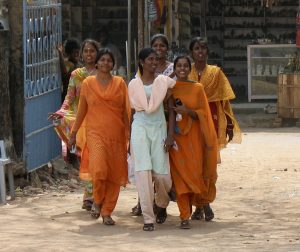 The holy dwells in the fabrics of India, in a woman’s bright sari, rich in colors with gold around the edges. It dwells in her scarlet bindi. In the dark eyes of the mothers and their children. In the moped upon which a family of five can travel. In the chai wallah who pours hot liquid from his ladle, causing a cascade of golden tea to land in the cup. In cows’ horns decorated for Pongal, the harvest holiday. In the mountains of crimson saffron and golden turmeric at the spice market in Pondicherry. In the vendor who sells me coconut water for ten cents and how he uses a machete to open it so I may eat the tender flesh. The holy dwells in old Indian men bent over in puffy shorts fishing for shrimp, as they have done for a thousand years. 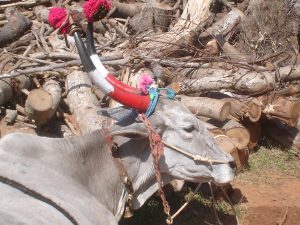 The holy dwells in the poor provinces of China and the simple people who live there. In the fireworks they set off to welcome the distinguished foreigners. In the little jacket she wears sewn of cat or rabbit skins. In the red Chinese New Year décor in their mud and stick homes. In the altar of their house, pictures of their ancestors, and in the powdery remains of the incense. In the woks outside where they light a fire beneath to cook, and in the single lightbulb which illuminates their home. In the two fattened sows outside in a pen and in the dirty kittens looking for handouts. In the cavernous wrinkles of some seniors seated in front of a basket of red chiles. In cherry blossoms, soft pink waves on hillsides which go on for miles. In the tombs like little caves, high up on the hillsides. The holy dwells in the schoolyards, where children learn coordinated dances to show the foreigners. In the children’s red scarves, and in their precious smiles and greetings of “hello!” In the rows of benches where they squeeze their little bottoms together, and in the teachers’ hearts who hold these jobs. In the unrecognizable restaurant dishes served for twelve at a round table with a Lazy Susan. In the impossible narrow streets that the bus drivers navigate without colliding with a building or a car, and the skillful three-point turns on a cliff. 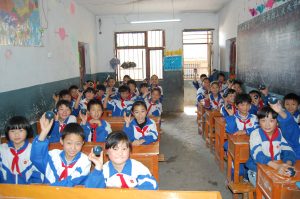 The holy dwells in the migrant workers in Shanghai who build the tallest buildings in the world. In how they live in temporary dormitories and take showers outdoors in all seasons. In how they live on $1.50 a day for food and don’t see their families for a year. In the plentiful karaoke clubs, noodle houses, and the glorious first bite of a xiaolongbao, the soup dumping. The holy dwells in the bad but hilarious translations of Mandarin to English on signs everywhere. In the baby’s pudgy cheeks and her smile as she looks over her mother’s shoulder. In the Chinese uncanny ability to sleep anywhere. In the schoolgirls’ hands as they walk linked together. The holy dwells in the elbow of a grandma who is jabbing you to get onto or off of a subway car. In the manner in which Chinese rush to the front of any line in a large mob, a behavior surely bred of their hunger during the Great Leap Forward.

The holy dwells in the pilgrim who circumambulates and prostrates around Jokhang Temple in Llasa, and in the clicking of his paddles used to protect his hands and knees. In salty yak butter tea. In the dense smoke of the incense inside of the temples and the odor of yak butter candles; smelling of earth, wet sheep, and rancid dairy. In the large Golden Buddhas holding space in the temples. In the Buddhist nun lifting her burgundy robe to squat and relieve herself at a border crossing where there is no toilet. In the police restroom that they let me, a foreigner, enter–a bottomless hole, where my pee lands on a cliffside twenty-five feet below. 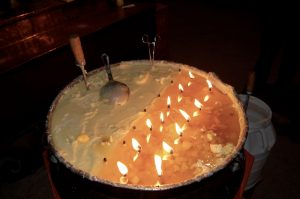 The holy dwells deep in the forest in the knot of a redwood tree and in the silence the tall canopy provides there. It dwells in a hummingbird nest and in an eagle’s aerie. In the sun, rain, snow, fog, lighting, thunder. In the infinite grains of sand upon which I sit on the beach. In the sunsets, in the flukes of whales, in the pod of dolphins swimming parallel to the shore. In the kelp forests of the Pacific Ocean, in the eyelash of a horse. The holy dwells in the center of every flower and in the tiny ball of pollen on the bee’s leg. 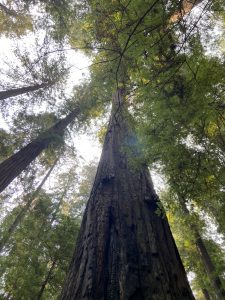