First Week in Shanghai: Ikea, Linen shopping, and the man with 3 kidneys

Good morning, world!  Saturday morning and our last at the Hyatt.  A little later this morning we will take a taxi to the Shimao Riviera Garden and take up residence in Tower 2 Apartment 37C.  Air quality has been excellent this whole week: the highest day was 92, which for the record was what it was in Walnut Creek last Sunday.  But then today a crud has arrived and it is 272, visibility is dreadful and we can both feel it when we breathe.  Yuck.

We arrived Tuesday evening and hit the ground running.  Wednesday morning we signed our lease and did a final walk-through of the apartment.  An employee at Bob’s office had already done so in advance of us and cracked some heads as they had not washed and repaired the curtains.  All’s well now. We then met our driver Roger who will begin on Monday.  Roger’s English is decent and he calls me Mrs. Robert. He said he would take me shopping.  Yay!  Thursday morning, we met with our relocation specialist who took us to Carrefour (giant international WalMart style store) to shop for small appliances.  For whatever reason, the Philips products were agreeing with us style and price-wise.  The Philips rep and the Panasonic rep were having a throw-down in the aisles–pulling out vacuum cleaners and showing us their features. The Panasonic rep was downright put out so I told her I’d come back for an air filter later. She smiled at me when we left.

After Carrefour, we went to the massive homewares market way across town which took 90 min because of horrible traffic.  We went right to a stall which had quite nice hotel style white sheets and we were buying 2 sets of sheets for a King and 2 each for 2 Queens.  Our relo gal, who is Indian and grew up in Hong Kong, thinks bargaining is a sport.  I was tired and less amused than the first time we went shopping with her last month to buy Dr Dre beats earphones and some luggage.  She infuriated the woman selling the sheets.  Just to put the costs in perspective, one pillow case is 8 Yuan which is about $1.20.  I wanted 2 down pillows and she almost wouldn’t let me buy them, finally they settled on a price.  This took so long we had almost no time to go upstairs to buy some rugs.  We walked into a stall which was closing and we re-opened it.  We chose 2 rugs and some bath mats.  I thought the owner wanted to kill us for a) re-opening his store and for b) for being her hardcore bargaining self, but then he helped us carry out the rugs and was very friendly!  I am not Asian.  Perhaps over time I will get used to this.  Long story short: the sheets don’t fit.  Super furious now.

On Friday, we went to our appointment at a Health Center in order to apply for our Chinese Resident/Work visas.  We had to fast so we dragged ourselves out of the hotel by 8 without caffeine or food and arrived by 8:30.  Kitty from the Relocation company was meeting us to guide us through.  We filled out some paperwork where I filled out the occupation as “teacher” and got scolded.  She asked me “Are you going to work in China?” to which I replied no, and she said, “Put down housewife!”  A sobering moment.  Bob is still laughing.  We then changed into robes and had the following tests: x-ray, blood draw, eye test, ekg and something else.  While waiting for the abdominal ultrasound, we were seated next to an American couple. She was pregnant and the man’s paperwork said he had had a kidney transplant.  They really held up the line!  I guess the doctor had fun looking at her fetus and then it turns out the man has 3 kidneys so the doctor had him in there forever and was taking photos of the computer screen, and was texting his doctor friends!  He washed his hands, hocked a loogie and spit IN THAT ORDER.  The doctor examined Bob without washing his hands again.  Great.  I was quick and we were done and driven straight to a Starbucks to get a coffee and something to eat.

Next was Shanghai Ikea!  OMFG!  It’s good to know that China’s middle class is growing and they have all sorts of time and money to roam the aisles (for stuff from China!) and eat some Swedish meatballs.  We had so much stuff to get, we were in there for 2.5 hours.  Exhausting and satisfying.  We filled the whole back of the van with our stuff and drove it over to our place to unload.  I was cleaning off those damned stickers FOREVER and cursed Sweden many times over.  There are still mugs soaking in the sink with glue stuck on them.

For our first Friday night in Shanghai, Bob took me to The Muenchener Paulaner Bar/Restaurant which was hopping!  We had beer and sausage and took in the sights of a huge restaurant filled with mostly Chinese and a few ex-pats at the bar and a really fun Filipino band doing American pop covers.  It was a cultural clusterfuck to say the least.

We are here at our place unpacking and putting together furniture from Ikea–just a few things, this is a furnished place and we only needed a table and chairs for the patio.  Bob only had one minor fit–this is per usual.  I ironed a couple of sheets (the ones which don’t fit) on our mini ironing board. You have never seen a gizmo this small, I finally got a chair for fear my back would go out.  Good thing the maid (the “ayi”) will 99% likely be short and she can iron on it.

Pics below:  first sunset from our place, little girl at the market,  pet’s poo-poo bags, apartment building, Danielle having a beer at German place. 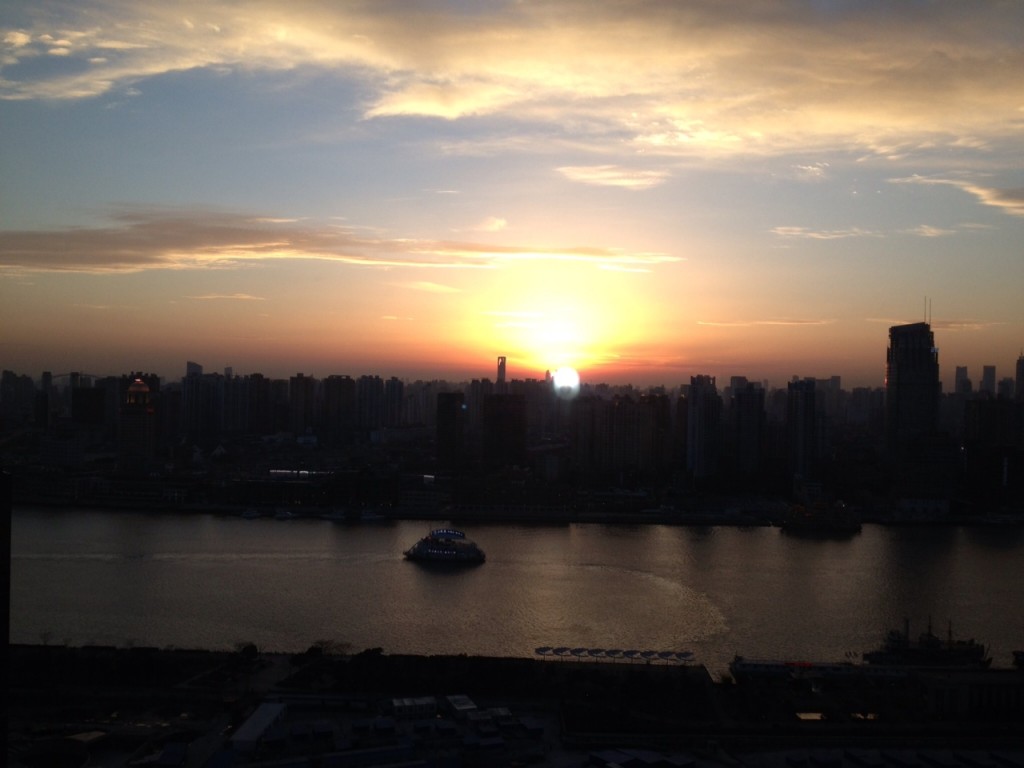 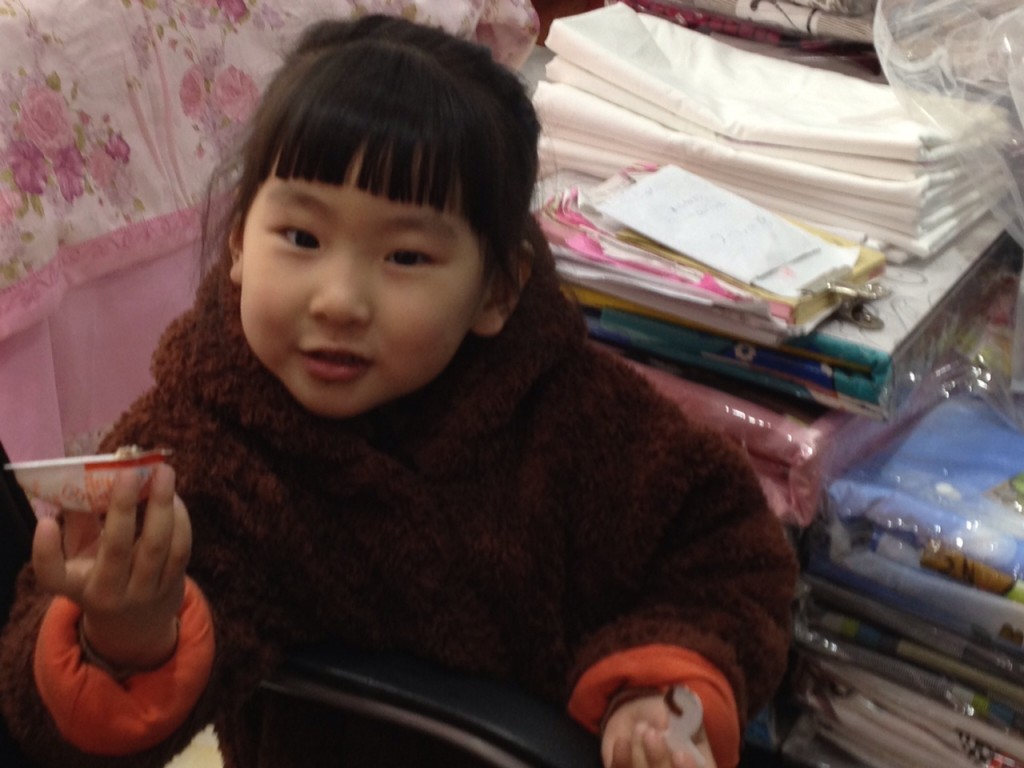 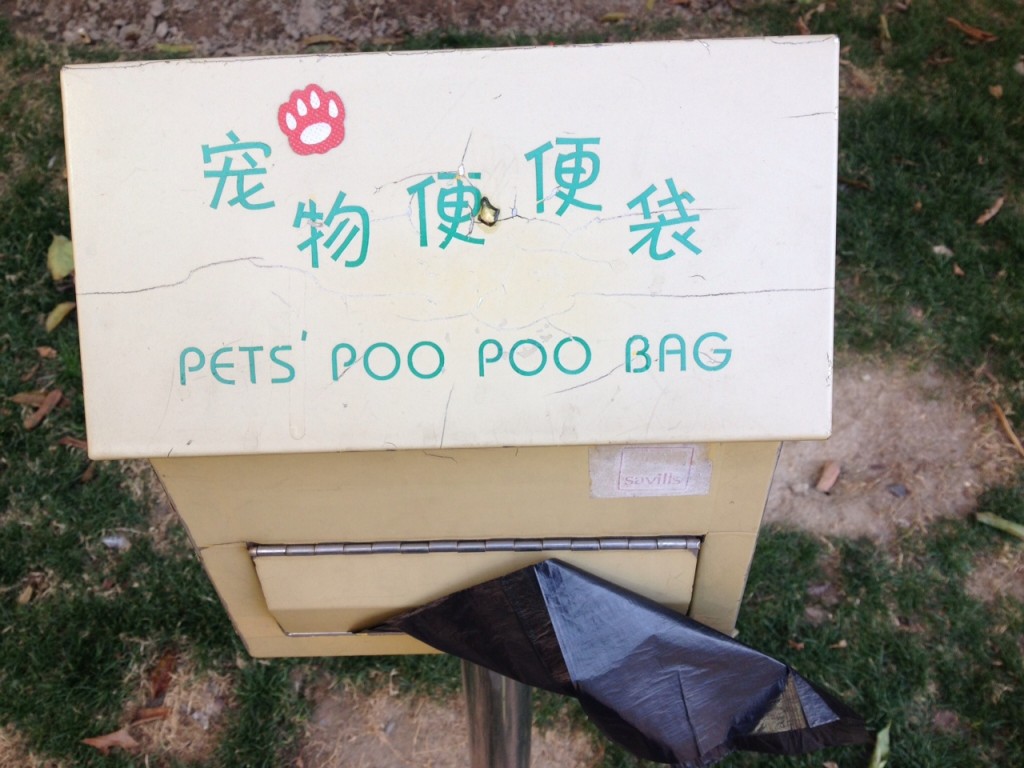 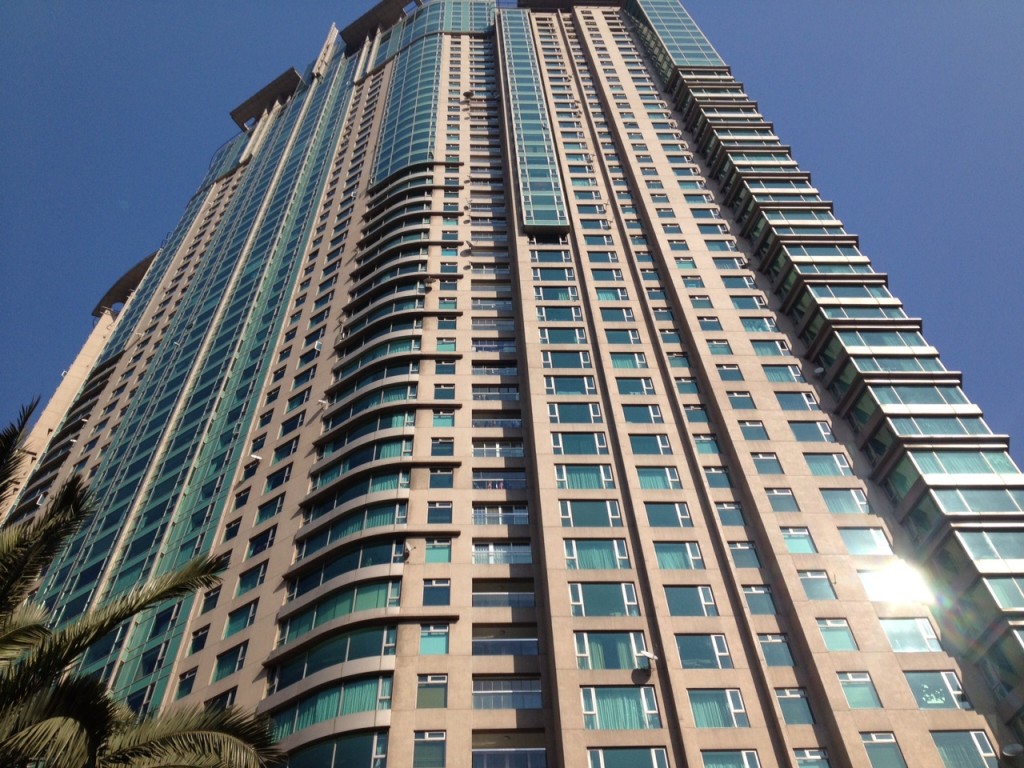 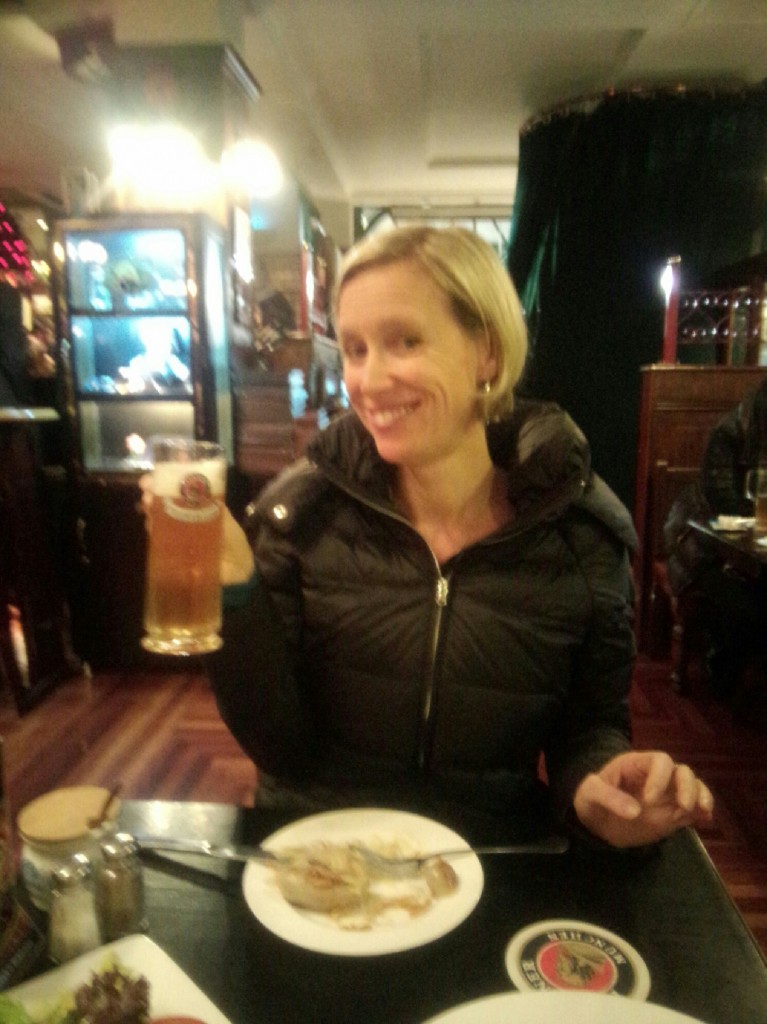