PLEASE — Feel free to subscribe yourselves! Little form is to the right. Take care. xo Danielle

I am pondering responses to my blog. Really? Am I making it sound that bad? Don’t let some spitting and public peeing damper your day. I don’t. China is a must-visit. It has Pandas! Terra Cotta Soldiers! The Great Wall! Forbidden City! Mao Tse Dong souvenirs in spades! Cheap massages! And freaking tall buildings, screaming fast trains, and a great subway system! There, you get about 6 exclamations.  And, seriously, I think crowded subways and elevators are fun. I don’t always like someone’s breath next to me but it makes me feel closer to the 23 million neighbors I have. Oh and we have found some extraordinary food!

Last Sunday, I had the most fantastic massage in recent memory. I got an “oil massage” from #3 employee at Bamboo Massage on Pucheng Lu, just catty corner from our apartment. Yes, the employees don’t get name tags with their actual names. I would like to know his name, really I would, but at least I can make an appointment with him the next time. I asked for a female therapist but there wasn’t one so I said ok I would have one with #3. He was delightful. He asked me if he was pressing too hard and actually he was but I couldn’t let it stop as I was healing a sore neck and trapezius muscle. I surrendered and breathed and moaned a lot. Getting a full body massage in China involves wearing paper underpants which look like a diaper. The first time I had to put them on I was a little upset but I tell you it just doesn’t matter. For 198 RMB ($30) for an hour massage, go ahead and make me wear a diaper.  That’s for the oil massage, the dry massage is only 138 RMB. This way they can pull the towel down a little and everyone understands there is no hanky panky going on. I wrote the following text to Bob afterwards: “Massage was off the hook. I could leave you for a small Chinese man.” At the other massage businesses nearby, evidently one can either get a happy ending or actual sex by the fact that there are either one or more women in very short skirts in the lobby. Neither Bob nor I are going to investigate further. We decided to trust what is available on the web about it. Look it up, it’s true. Earlier this week, I saw a hooker leaving the apartment block next door and return to one such happy ending massage place. She was wearing a fantastic short pink skirt, pink tall boots, fuzzy pink jacket ensemble. Every guy was staring at her as she left the property.

Lila was here for her Spring Break. The only thing more fun than going out and about by myself China is going out with my blonde daughter. Together, we were superstars–people snapping our pictures willy nilly. We got a few shots of the people who took our pictures, too. Lila is a kindred spirit and thinks the children and older people are as cute as I do. She is equally enthusiastic about finding cats, too. We did as many top tourist attractions as possible. Shanghai Museum was terrific. Nanjing Road is a busy shopping street all lit up like Times Square. New to me this week was Tianzanfang, a shopping and restaurant district built exactly out of the tiny lane housing “Shikumen” of a neighborhood in what is called the French Concession of Shanghai. While dining upstairs at a rooftop Italian restaurant, we were above the apartments slightly and could see other people’ balconies and into their tiny kitchens. Great discovery. We visited a “Water Town” of which there are 7 within about an hour of Shanghai called Zhujiajiao. These ancient villages haven’t changed much since they were built about 500-700 years ago. It is a hugely touristy thing to do but a must-see for old Chinese charm.

Turns out, Lila was incredibly useful at “Quiz Night” at the pub down the road called the Camel. We were invited to join a team and we played with them two times. Lila was excited to join us and boy, was she the star of the evening. We were in second place for the night and we bet it all double or nothing on a bonus question. The question was: What color is hippo milk? She knew the answer as she trolls sites like Buzzfeed and Stumble upon. Absolutely heroic and we won a bottle of vodka for the table. We are quite sad that several of our new friends from this group are going back to England soon. It’s been the best mid-week activity going on since the Empty Nesters took to the Bocce Ball court in 2012 in Pleasant Hill.

The weather has been quite nice for a few weeks. We had a little rain but mostly sunny and warm days and only a few days with pollution over 100.  If you’d like to follow along with Chinese Air Quality Index sites, here is the one we use. http://aqicn.org/city/shanghai/ Spring has sprung and there are lovely fruit trees in flower as well as magnolias. I heard the weather is just lovely in April.

We live on the Huangpu River which is a tributary of the Yangzte River. Very nearby it flows out to the Yangzte River Delta which soon goes to the East China Sea. The river is quite shallow (27m) by shipping standards because very few large ships go up. When we go to the airport, we can see many large tankers which are anchored there and their cargo must be being shipped upriver. I can see coal, sand and other construction materials on top of barges but other times boats weighed way down in the water. Turns out they have fresh water for construction. There are at least 3 ferries which cross the river between Puxi (West District) and Pudong (East District) where we live. The boat traffic is often so thick, the ferries often have to wait to cross the river or flow down or up the river in order to pass between the boats and barges. From the window, it’s entertaining as hell. The ferry costs 2 RMB (.30) and takes less than 2 minutes to cross and runs every 10 minutes beginning at 6am. The first ferry sounds a very loud and impressive horn, not repeated every ten minutes but randomly during the day.

Memo to China: It’s almost April 1. Take down the Christmas decorations. This is making me veritably berserk. I take our Christmas tree down on January 1. While Chinese New Year was happening on January 31 and the Christmas wreaths, trees, ribbons and everything else are still up, I began to grumble. But now it is Spring and it’s just wrong. 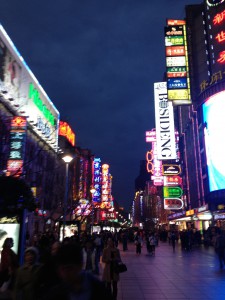 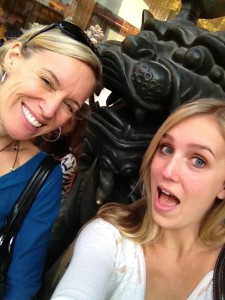 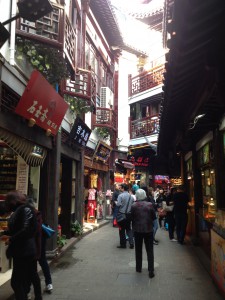