Bummer! I hit publish by accident. Here is the rest of Tibet 2015 without long paragraphs complaining about Chinese behavior. Just the facts, ma’am.

We were in Lhasa for 3 nights and then were picked up early Friday morning for a trip out further west in Tibet along the Friendship Highway, which goes from Lhasa to Kathmandu. First we went to the city of Shigatse and then to Gyanste. Here lie even more beautiful monasteries and temples and even worse toilets than on the train. At a few points during this journey, I thought I could never see a temple, a yak butter candle or a monk again, but you know what? I did and often they were even more magical. I kept eating yak curry and butter chicken for lunch and dinner and I kept having rice and bok choy for breakfast. There is no coffee or tea offered at the hotel breakfasts in Chinese hotels. I travel with my own tea bags now and can make tea in the room THANK GOODNESS so I don’t have to have a caffeine headache along with the altitude headache. I convinced Bob that having tea was better than having no coffee. He agreed.

Hotels were very Chinese and I loved what was in the lobby of The Shigatse Hotel: Western mannequins wearing Tibetan costumes! Why? I think there are Chinese mannequins I have seen them elsewhere. 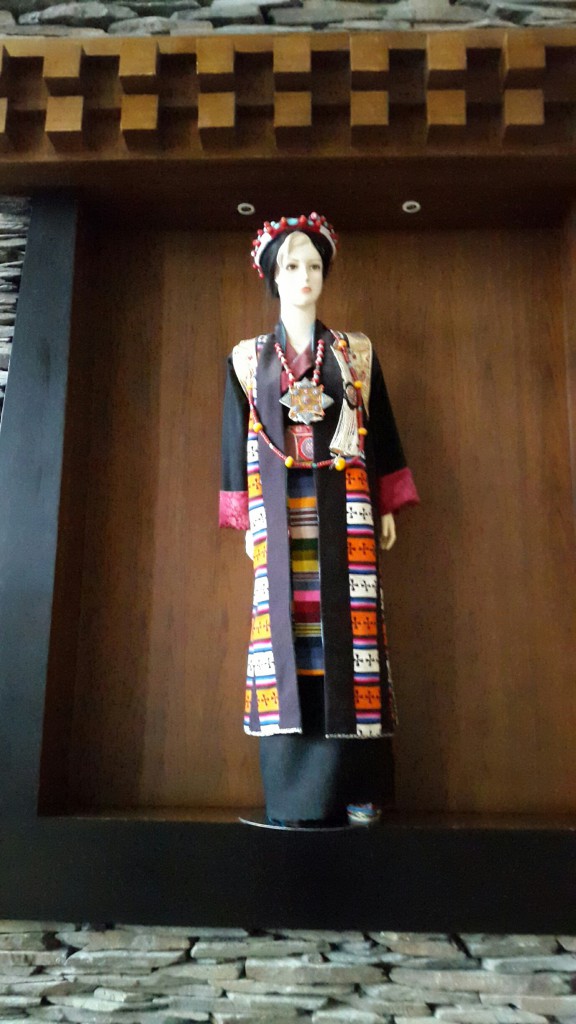 The best thing about Shigatse, besides the giant Buddha at the monastery whose index finger is 4 feet long, was the restaurant we found on Trip Advisor. It said it had live music every evening and that the food is pretty good. The picture of the menu is worth a thousand words. 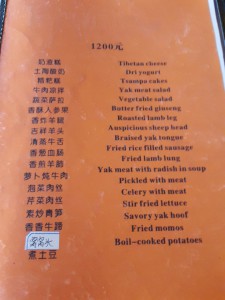 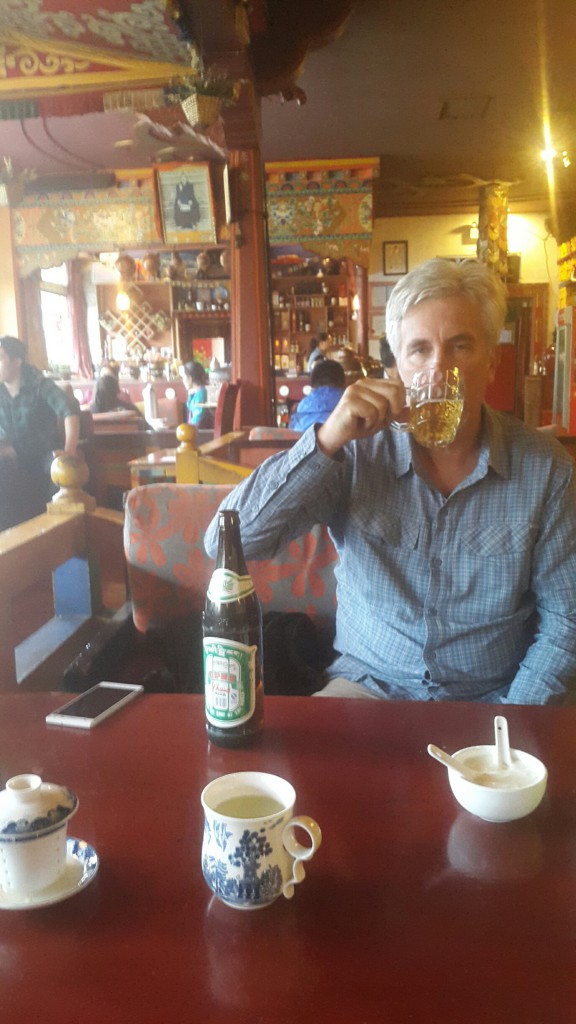 We ate yak sausage and about 3 vegetable dishes. It was all very tasty. Live music was very nice—very ethnic. Upon leaving, it was raining and I thought getting a taxi would be a good idea. A young woman from Mongolia took it upon herself to hail a taxi for us while translating for us. (She didn’t speak Tibetan either but somehow it worked out.) While hailing the cab, we saw 2 farmers and their cows walking right up the city streets. 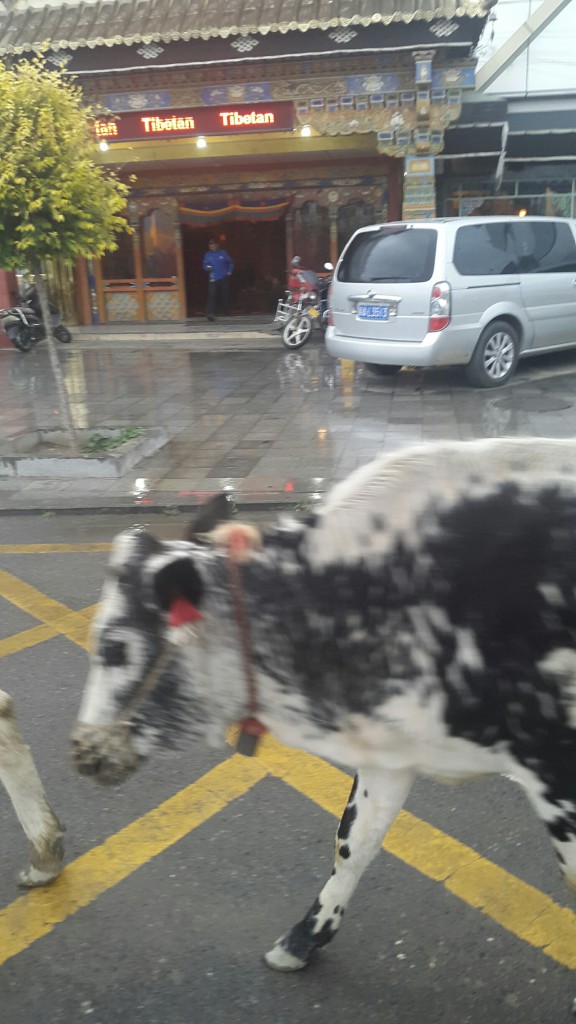 The next small city we visited called Gyantse had a much less comfortable hotel. Bob said there was a dead rat under the bathtub but I never saw it. (You know I would have included a photo here!) There were no mannequins but this lobby had a pool table, a shop to buy cigarettes and whisky (but nobody running the shop), a telephone booth and a cat. The town had a ridiculously beautiful monastery where we looked around and saw even more Shakyamuni statues, more yak butter candles, and more monks. Guess what? They were more beautiful. As was the town—we walked among the Tibetans’ neighborhood and saw their charming old houses, stone streets, cows tied up to the front door, babies being held by toothless grandmas, little kids playing soccer in the street.

The next morning we had to leave at 5:30 and beat the traffic caused by road improvements! We ended up feeding our entire box breakfast to the dogs at our next stop while waiting for the sun to rise. At 5000 meters (ouch), we saw a glacier, lots of yaks on pasture, a yurt with a solar panel, a farmer milking a yak for breakfast and really annoying hawkers selling stones. I gave them some of my breakfast as well. This led us to see a lake the most gorgeous hue of blue I have ever seen: 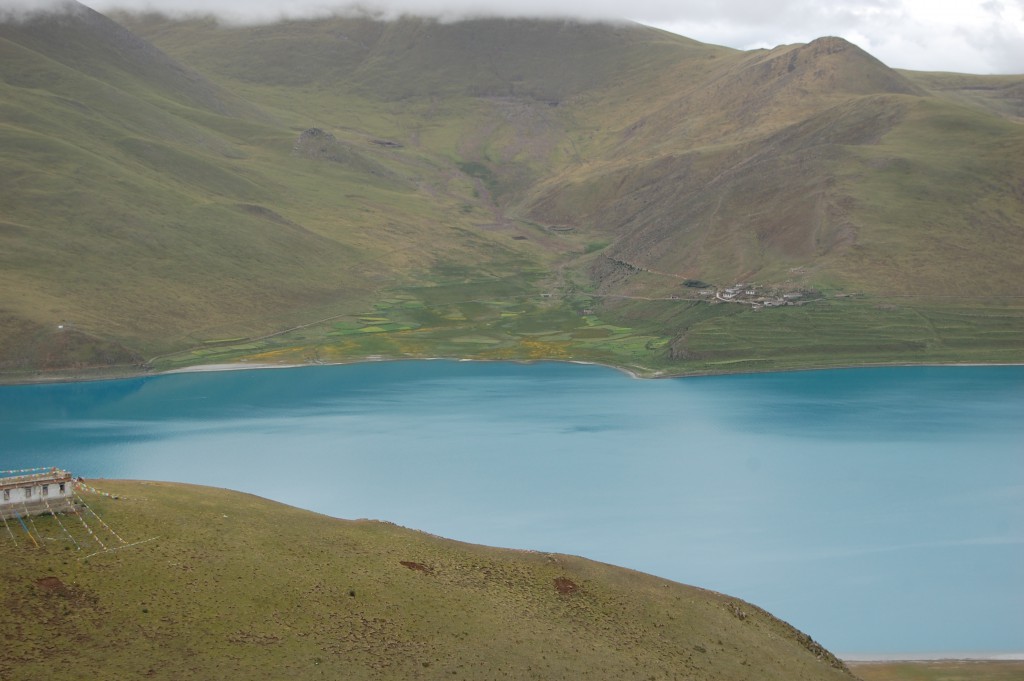 and then we made our return to Lhasa and the now most appreciated St. Regis Hotel. Oh yeah–hot bath.

Here are some shots out and about in Lhasa, Gyantse and Shigatse