We knew that July and August were going to be our last months in Asia (for now) so we got going on some trips we both wanted to do. We organized a tour through Country Holidays to go to Tibet and even put the trip ahead so we could get there via train. This idea sprung from Bob having altitude sensitivity and we thought going via train from Xining, Qinghai Province to Lhasa would help his/our adjustment to the altitude. It may have, but I tell you taking that train for 21 hours is not worth it! We were in agony at 5000 meters (16,000 feet) anyway and had to endure people throwing up in sinks, a snoring cabin mate, terrifying toilets, smoking, rude passengers and train employees. Yuck. I NEVER forget to take my Excedrin with me and find that little kick of caffeine that makes the aspirin go to my brain is really helpful. Effing tore up my bags looking for it. Nowhere. Pounding headaches ensued. Take it from us: fly to Lhasa and rest for a few days.

Upon arrival we were greeted by our tour guide, Tashi. He and the driver drove us to the St. Regis Hotel, a short walk to the interesting area of Lhasa called Barkhor Market. We checked in to our lovely upgraded suite (Thank you Bob Schoenfield, traveler extraordinaire who has points at every hotel chain-yes!) and ventured out to the market to find the New Mandala Restaurant recommended by Lonely Planet and Trip Advisor. It’s the most casual affair on the roof of a three-story building. Nepali, Tibetan and some Western food is served on metal plates. Lots of Yak curries and the like, Nepali set which included dal and veggies and a little spice chutney.

This market is nearby the Jokhar Temple and it is a bustling center where Tibetan pilgrims in their traditional clothing circumambulate the temple clockwise. We got caught going the wrong way against the stream, realized our error and corrected! It feels so nice to walk with them even if not walking the entire circumference of the the temple.

The next morning, Tashi picked us up at 8:30 for our turn to see the Potala Palace, the seat of the exiled 14th Dalai Lama. It’s done by reservation time and we easily went in at the correct time and climbed the stairs to this massive palace once a political and religious based castle. We were in the palace for no more than 90 minutes and saw many, many buddhas, gold this and thats which I could not photograph. However the entire palace is rather photogenic. 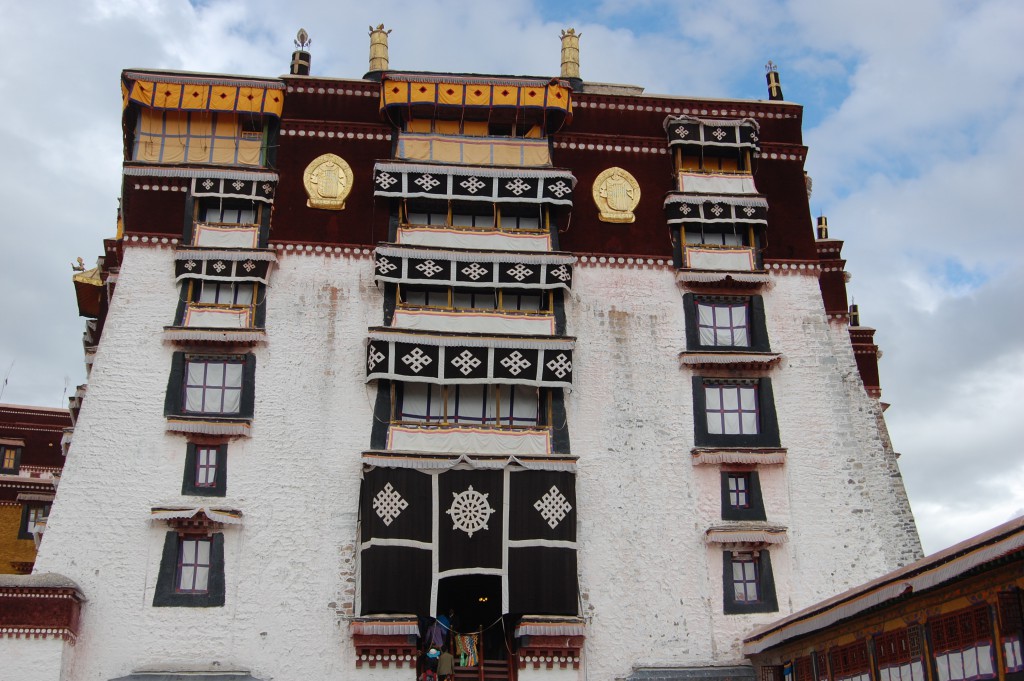 The palace was one of the most beautiful sites I have ever seen. I loved the ancient stone walls and floors and tons of yak butter candles burning and incense until we were almost choking! I loved the beautiful painted walls which I did manage to snap just these 2. 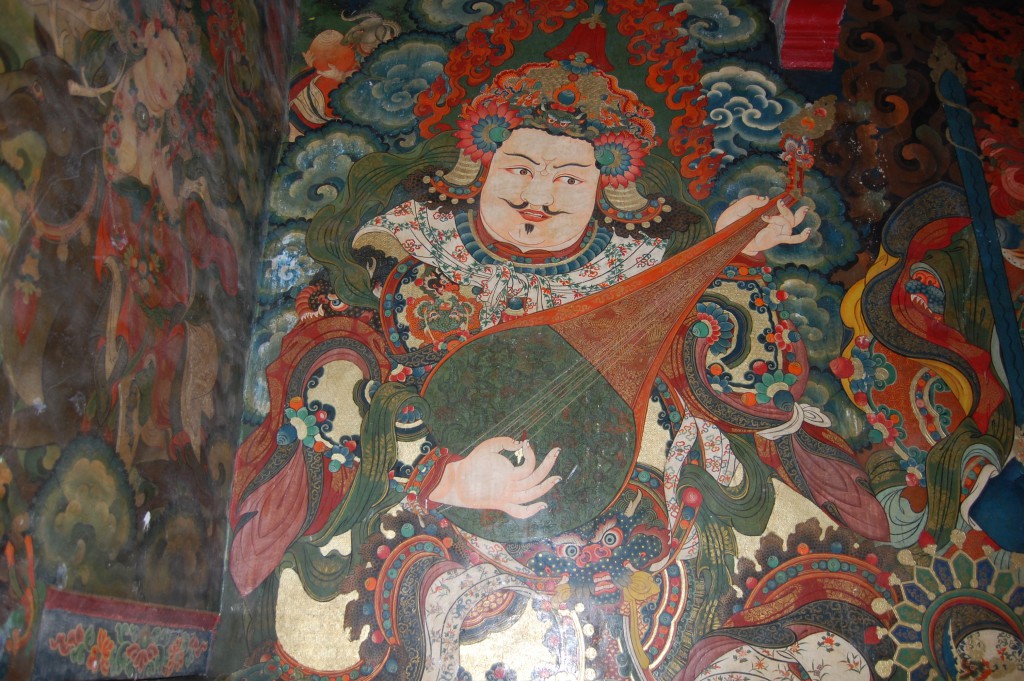 We could only do so much without feeling exhausted. The altitude gave us a sense that every step was difficult and that it was challenging to get enough air. Even after the whole week, we just never adjusted completely. Another challenge of visiting Tibet is dealing with hordes of Chinese tourists. They are there in their tour buses led by loud speaker shouting guides–annoying. So on the one hand, we think we have a break from the spitting and smoking but it’s the same, they are all there. At our hotel one afternoon, we decided to sit on the sofas outside our room. Another man was smoking there but had gotten up. He returned, still smoking and spit on the grass right next to us. Bob was not happy and told him so. Also, this really happened: We went to pool and I got changed in the small locker room. It was quite flooded and 2 young girls and their nainai (grandmother) ran in. The nainai told the children to pee on the floor in the puddle! There was a toilet less than 5 feet away and she told them to pee on the floor of the flooded locker room! This is the St Regis Hotel. It was not cheap! This family had some money in order to be there–they are not peasants. Nouveau riche: get some class. I was shocked and horrified. I don’t know why after all this time but I was.