A taitai is a housewife.

You might remember I blogged ages ago that China has the 4 Ss: Shouting, Spitting, Smoking and Shoving.  I am amused by the shouting the most perhaps. People either walk or stand around absolutely shouting at each other as if they are not next to each other. They shout into their cell phones on the subways and buses. They shout into a phone while riding their bikes. The doorman shouts for a taxi into his walkie-talkie when I arrive downstairs SO LOUDLY, it echoes off the walls and high ceilings and is quite deafening. I often think people are having an argument and sometimes they are, but mostly they are quite unaware of the volume of their voices.

Two weeks ago while Bob was in Hong Kong, I went to a lovely tapas party upstairs from us at our Scottish neighbors’ Lesley and Alistair. Alistair works for Disney and invited a lot of friends from work, most of whom are American and many of whom were from LA and Orange County. I really enjoyed getting to know them and we played a little game of SoCal vs NorCal “you take all the water” but we were just kidding. Lesley is an excellent cook and her husband a really good bartender. He made one of the best Bloody Marys I have ever had. I got there at 1 and I tried to leave about 4 but the next thing I knew it was 7pm and I was still there having another glass of wine. Plus they made this toffee made out of what is called treacle (I think it is extra thick molasses) that is so hard it could take out your dental work in a sec. I must have had 5 pieces and a few others did too. Completely addictive. I also tried haggis for the first time and it was pretty good! These people are hard core–they fly frozen meat home from their countries of origin, sometimes 40 lbs at a time. I thought we were nuts for bringing 8 bottles of wine, 5 pounds of coffee, 3 pounds of protein powder and a bunch of rice cakes.

Ex-pat adjustment continues on for me and with the multiple visits to California and Guatemala in February, March and May. I have had to re-start here 3 times now. This is not helping my adjustment to life here.  A friend told me back in April that it takes 6 weeks to get settled enough to have a routine and a regular schedule and the longest I have stayed here is for 4 weeks. I am wrapping up my 4th week back after a visit to Lafayette for Sydney’s graduation from the San Francisco Conservatory of Music! I do have friends and some activities which I do regularly and FINALLY Mandarin lessons twice a week. But during a quiet day when I don’t have plans and Bob is in Hong Kong or Taipei or here but working late, all of a sudden, an afternoon by myself feels daunting and lonely. I am grateful for the few things I do regularly now: Mahjong on Monday afternoon, Mandarin on Tuesday/Thursday mornings, Quiz Night at our local pub on Tuesday nights, yoga on Monday/Fridays, Nia with Siobhan Tuesday/Thursdays and would you believe a little more Nia on the weekends?

NiaShanghai got a little kick in the butt when I received an email from Elena, an Italian woman who lives here in Shanghai. She had been to Beijing to a retreat where Debbie, one of the Beijing Nia teachers presented Nia. Elena contacted me shortly afterwards and I decided to teach a class and invite a few more people. Siobhan, Elena and DanDan came to class last Sunday morning. Then we had a second class this past Saturday morning and three more women came. Everyone is fired up and looking forward to more.

Naptime: In China, it is absolutely appropriate to take a nap anywhere. Drivers sleep in their cars, feet up in the window. Security guards nod off at their posts. The recycling guy sleeps in his cart in the shade in the heat of the day. Residents and employees of our building sleep on the couches and chairs in the foyer at any time during the day.

I have been trying lots of fruit and one of the most memorable is durian from Southeast Asia. Long ago, I had tried durian in a smoothie at a juice place in Austin. It was delicious and I had hoped to run into it again. Last Saturday, I bought a durian from a kid with a tiny truck on the street. I paid 54RMB ($8) for it and hope I didn’t get too ripped off. It weighed around 2.5 kilos. I find I get less ripped off by men fruit sellers as opposed to the Shanghainese alpha bitches with their purse-carrying husbands cowering at the back of the store. Needless to say, it was a smelly affair – although durians taste like sweet almond cream, they smell like a family of dead animals rotting under your home. I am still glad I ate them but I had to throw out the remaining one quarter because the whole apartment was beginning to smell, seeping out through the fridge.  Bob would walk in and loudly say…wtf is that?! Did you know that Durians kill about 5 people a year from falling out of trees? I like what Wiki had to say about it: http://en.wikipedia.org/wiki/Durian 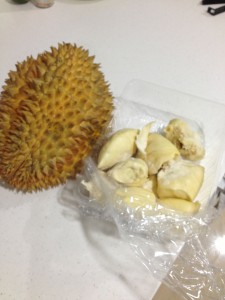 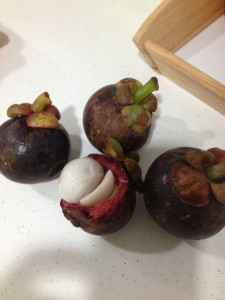 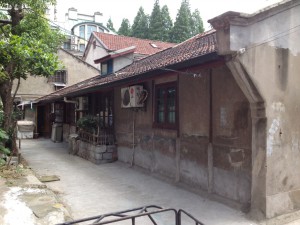 Our family just got here from CA! Bob’s brother, sister-in-law, 2 sons and our daughter Lila arrived last Thursday night. We are visiting the sites here in Shanghai and flying to Da Nang Vietnam on Friday for a week beach vacation. Afterwards, we will head to Beijing and the Great Wall before the Schoenfields fly out. 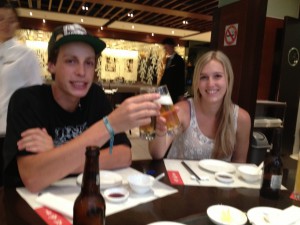 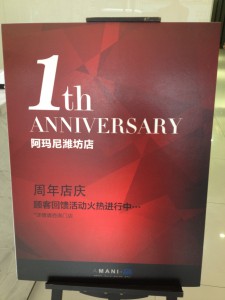 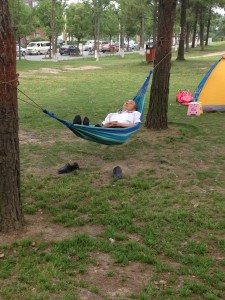 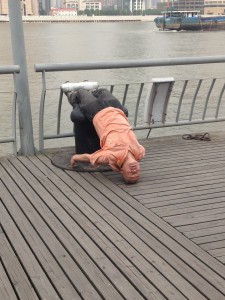 Fashion police: little sock booties. Ladies! please stop wearing those little ankle stockings with your sandals and pumps and bare calves. We can see them! It’s summer –go barefoot for god’s sakes. (See below: covert picture of a woman’s ankle but featuring extremely adorable kitten who lives at the florist.) 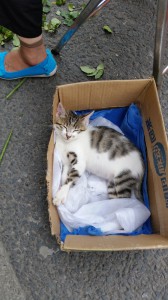 Humidity has entered life here in summertime. So far it has not gotten too hot but what a change for this 27 year resident of California and lifetime resident Bob. Each morning I check the weather and the pollution levels, which have consistently low to our pleasant surprise. It has been 92% humidity each day early in the morning at 5 or 6am, then tapering off to 75% or so during the day. So even if it is only in the low 80s, it feels much hotter. And just now at the very end of June, we are experiencing the Plum rains. I have seen rain in my day but this is pretty big, long storms of steady downpour. Yesterday we took the high-speed train to Suzhou about 80km away and walked around and mostly got soaked! Fun day despite the dreary weather. Suzhou is a charming 2nd tier city with only about 6 million people. It is very old and has spectacular gardens and a very old walk street along a canal. We took a boat ride on the canals with a charming old man who sold Brian some play cards. 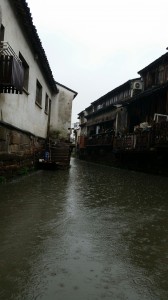 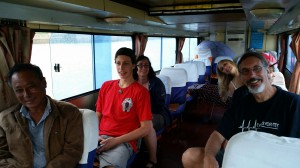 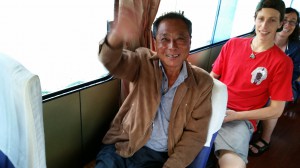 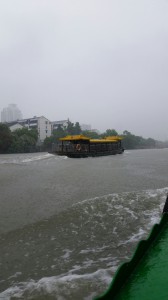