Driving Mrs Robert
I already wrote a Facebook status about my conflicted feelings around returning to China after my 22 day visit to Portland and San Francisco which I took so soon after moving to China.  I think I am confused.  Here is my post:

Pros and cons mutterings on this extra rainy day as I head to SFO to catch my flight to Shanghai: (not in any particular order!)

Cons
1) No pets
2) No Nia/pretty much no dance but I am looking
3) Can’t understand anything
4) Run the risk of accidentally buying clover at the supermarket when meaning to buy sprouts
5) Miss kids & friends terribly
6) Occasional bad pollution (but opportunity to rock the new fashion of masks!)
7) No garden
8) Don’t know where I live
9) Getting stared at

As soon as I returned, I took advantage of what my apartment does have to offer. First-off: the view. The bedroom has a view, the living room has a view, even the (very large) bathtub has a view. This does not suck. The water comes out boiling hot. I mean boiling. I have taken a few baths that take up to an hour to cool down from. Who needs a hot tub?

You may recall the visit to the Chinese clinic which we went to in January for health exams in order to receive Visas to live and work in China (see man with three kidneys for the story.) I failed the health exam and needed to have a reexamination of my X-ray on Monday. The first X-ray gave evidence to a shadow on my lung and they would not pass me.  I had an appointment to meet Kitty Miao (yes!  that is her name!) from the relocation company to assist.  The second X-ray still showed something but they let me pass and have my health certificate.  Here is the report: “2014.2.3 Reexamination: A small patch of clouding is absorption almost. Fibrotic lesions in both apices are seen. Striped shadow in the left upper region is noted. To follow up in another hospital is suggested.”  I you assure there is nothing wrong with me.  The doctor asked me if I have been coughing. No. That’s because I don’t have tuberculosis. Really. They recommend further testing at another facility. They also had me fill out a questionnaire about my knowledge of tuberculosis, how it is spread and how it is treated. I confess I didn’t know much.  Meanwhile, they told Bob he has a fatty liver but passed him. I Googled the topic on the interwebs and saw lots of humorous posts from Westerners getting their health exams at the same clinic: one man was told he had an abnormal nose, one was told he was too tall, and many, many were told they have fatty livers.

Fun China topics!  Shanghai left turn: the light turns green and the first car proceeding forward yields to at least 7 cars of oncoming traffic that is turning left!  This system actually enhances traffic flow as opposed to our US system which always leaves about 3-4 cars wanting to turn left but the light has turned red already.  The Shanghai right turn:  red lights are merely a suggestion. When wishing to turn right and your light is red, maintain a steady speed, do not stop at the red light, disregard pedestrians in the crosswalk (cars have the right of way always, not pedestrians) and proceed into traffic which has a green light and is flowing nicely. Just keep going!  Your car will fit in the road, no problem. If you are a bicycle or scooter which is about 20% of Shanghai traffic, disregard red lights altogether and pull all the way into each intersection stopping the traffic which is going with the light and cross to the direction you are headed! No problem! This also always works out. When exiting a freeway come down the off ramp and get into a middle lane which says you should proceed forward through the intersection. Then while all lanes have a red light, take a right hand turn in front of at least 2 lanes of traffic which are also going straight. No brainer! Get to where you want to go! Amazingly we have not seen any accidents. They all expect others to drive the same way they do…

Public urination. This is starting to bother me. On the block behind our apartment complex, there is often a line of taxis ready to service our buildings. I noticed on occasion that outside the line of taxis is a line of taxi drivers pissing into the plants behind the little white fence barrier. When walking down this street once, I noticed the plants are all yellow just on the edge where their piss can reach to. Ew! Around the corner there is a Public Toilet but they would have to pay 1 Yuan (15 cents) so I guess they don’t want to. Plus, parking may be a problem there. During Chinese New Year, public urination was worse than ever. I even saw some foreigners just outside the Camel (our local British Pub) pissing on the street in broad daylight not even turned all the way around! Jesus, I do not need to see that. Get some manners and use the toilet at the Camel before you leave. Bob has not taken to this yet but he is beginning to blend in culturally so maybe this is his next step towards integration.

Hock-a-loogie.  I haven’t hung out on Clement Street or California Street in the Richmond District of San Francisco since I lived there in the 90s but my recollection is there were gobs of spit all over the sidewalks. I was possibly sensitive to it at the time after having spent the summer of 1991 in Leningrad, The Capital of spitting of all time.  I expected public spitting in China to surpass all memories of Russia and San Francisco but it disappoints. Hardly any! Sometimes I hear someone winding up a good one and glance and it’s an old grandma! Bob says there have been some education campaigns targeted at the outlying provinces to stop the public urination and spitting. Also the snot-bombs do happen (think Madison Bumgarner) so be careful not to be in the line of fire! It’s bad. China, get some manners.

We went to Hong Kong on Tuesday for 3 nights. It was a brief trip mostly in order for Bob to complete his Chinese work visa application. He needed to leave the country and go to the Chinese Consulate.  We made a mini vacation out of this trip and I got to take a terrific Nia class from the very lovely Tracey Fenner and meet her students.  Bob also went to the very famous Sam’s Tailor over in Kowloon and had 4 shirts and a suit custom made.  Sam’s clients include the Prince of Wales, many recent American Presidents, John Boehner, David Bowie and Angela Merkel all of whom are pictured in snapshots on the wall kind of like dry cleaners and restaurants in Manhattan have pictures of their famous clients. This one-ups them with hallowed world leaders.  They will finish the suit and shirts and send them to China via courier.  Sam, if you don’t know, is of Indian descent and probably the original Sam’s son.  The shop is a hole in the wall.  It was so crowded in there and I had to wait outside for Bob.  Sam’s employees are mostly Indian except for one elderly Chinese gentleman who does the actual measuring.  He is about 4’10” and is approximately 75 years old.

On the 2nd night in Hong Kong, we searched out an interesting place to get dinner and ended up in a very small French Bistro called La Cabane on Hollywood Road. The windy streets up the hill remind me of San Francisco and Monaco (I’ve never been to Monaco but it looks like it a little) with ridiculously nice wine and good eats. It had an unusually affordable wine selection and tasty small plates and charcuterie. We chatted up the French owner and American bartender and we all agreed that Shanghai needs a restaurant that hip but they weren’t willing to go open one yet.

I loved Hong Kong perhaps most because everyone called me “madame.” Hong Kong is about 50 years more civilized and more than 150 years more British than Shanghai.  Shanghai is trying but it is not there yet. The driving is calmer in Hong Kong (left side of the road, right side steering wheel a la England), the citizens more sophisticated and the vibe is more worldly.  I loved the natural setting of this island city–a large harbor with hills all around just built up like crazy with high rises – similar to San Francisco except for the high-rise and over-population part. We had bad luck with weather and it was overcast, foggy and rainy the whole time we were there. We didn’t bother taking the tram up the hill for the view.  Instead we just ate more.

I wanted so much to get high tea at the Peninsula Hotel in Kowloon but we arrived at 3:30 and it turns out there is a one hour wait. Instead we got tea and a bite to eat in the 2nd level bar.  I was terribly disappointed and jealous of the dozens of other patrons who were seated at luxurious tables and being served tiny sandwiches on little trays with linen napkins and tea on good china. Alas, there is a Peninsula Hotel in Shanghai so I am over it. At each establishment I went to, I turned over the saucer to see what kind of china it was–always the same Narumi from Japan.  So pretty.  The last evening we went out with a Hong Kong friend of Bob’s who he knows from the mobile industry. We ate great Chinese food and had a fantastic dessert, which was like Almond pudding. Really yummy.

Roger, our Shanghai driver, now has a nav device in the car and isn’t getting lost anymore.  He has the GPS run all the time whether he needs it or not. This is rather annoying as it makes a little alarm noise and speaks in Chinese every block. He is, if nothing else, a very careful driver. He drives too slowly and the trip back from the airport takes 50 minutes instead of 35.  Bob and I decided to take the high-speed airport train, the Mag Lev (magnetic levitation), to the airport instead of our car on Tuesday. It goes 300Km/hour (~185mph) and took 8 minutes to get into the airport terminal.  This is the slow train.  In the morning it goes 430kph. Holy cow.  We heard it was the most expensive transit project in the entire world and continues to lose money.  It costs 40 Yuan for “ordinary people” and 100 for VIPs, which is $6.25 and $15.00 respectively.

Roger likes to ask Bob if he is having lunch and what he is having for lunch every day when he drives him to work.  “Mr Robert, will you have lunch today?” Often, some of the team in Bob’s office go to the Country Manager’s apartment nearby and have a home-cooked meal from his ‘ayi” (maid.) If they go, Roger gets a to-go plate. But even when he is driving me somewhere, he asks if I am having lunch (Mrs Robert, will you have lunch today?”) and if Bob is home for work, he asks if I am cooking him lunch. We are not sure about why this is the only topic he discusses.  Roger is in his early 30s, is married to a Doctor of Chinese Medicine and they have a 5 year old son.  After we fly out, if Bob has not given him our flight information for our arrival, Roger sends several texts until he does.  Roger is very conscientious. 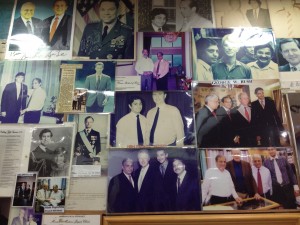 Clients of Sam’s include Prince Charles and Colin Powell 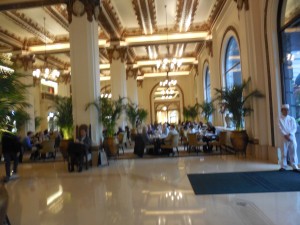 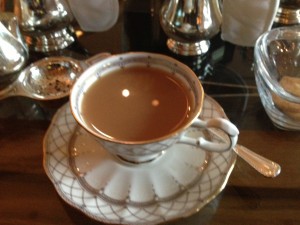 Tea service at the Grand Hyatt 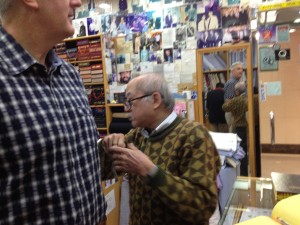 Bob gets fitted at Sam’s Tailor 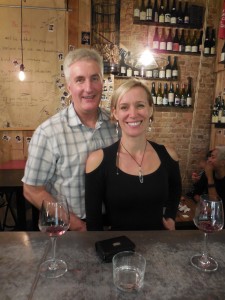 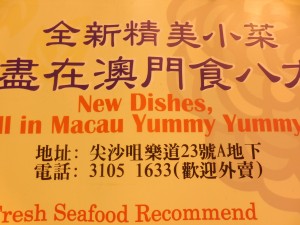 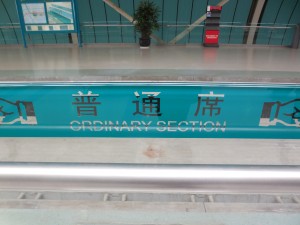